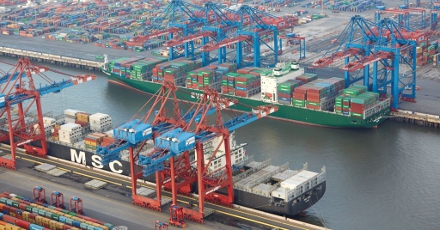 The Port of Hamburg is growing: Increasing the Efficiency through "smart" Port Management

Last year the Port of Hamburg was once more able to strengthen its position as Europe’s second largest seaport: approximately 140 million tonnes of cargo went through the port, which is an increase of 6.2 %. Its proximity to eastern Europe makes Germany’s largest seaport a major European freight hub. At the same time, however, the Port of Hamburg is an inland port – a fact that poses a particular challenge to the Hamburg Port Authority (HPA).

Last year the universal Port of Hamburg recorded growth in all cargo segments. Both general cargo trade at 97 million tonnes (+ 5.7 %) and bulk cargo trade at 42 million tonnes (+ 7.2 %) showed above-average growth. At 9.3 million TEU (20-foot standard container), which equals an increase of about 4.4 per cent, container trade proved once again the most successful segment.

The increase in throughput rates is primarily due to rising transhipment trade with the Baltic Sea region, which grew by 10 % to about 2.3 million TEU. In the feeder and shortsea shipping sector, the Port of Hamburg in particular benefits from its location about 130 kilometres into the inland from the open sea. Goods from overseas can be shipped to the Baltic Sea region fast via the Kiel Canal which is not far from the Port of Hamburg. The Port of Hamburg is also close to the European hinterland. Land transports are short, making the port a hub for all kinds of cargo and an attractive location for the transport industry.

Asia, the Port of Hamburg’s main trading partner, is well aware of that fact. Last year, container traffic from and to Asia rose by 3 % to 4.9 million TEU. Export trade in particular soared to 2.2 million TEU (+ 5.1 %). Import cargo put through Hamburg rose to 2.7 million TEU (+ 1.4 %). 3.4 million TEU containers handled in the Port of Hamburg came from / went to East Asia, with the PR China and Hong Kong being the leading markets. Equally positive was the development of cargo trade between Hamburg and other European ports, which increased by 9.5 % to 3 million TEU. Trade to and from America declined slightly to 1.1 million TEU (- 3.3 %). Container traffic with Africa went up to 268,000 TEU, which is equivalent to 12.4 %. Direct traffic to and from ports in Australia/the Pacific region decreased to 42,000 TEU (- 2.5 %).

The inland location of the Port of Hamburg offers many advantages, but it also presents a number of challenges. Due to its proximity to the city of Hamburg, land resources for the port to expand are limited, and other options must be explored to increase the efficiency of Germany’s largest seaport. The HPA is focusing on intelligent port management, which is to ensure higher efficiency through IT-supported measures. Apart from maintaining and refurbishing the port’s infrastructure such as roads, rail tracks and waterways, the port administration also takes care of servers and fibre-optic cables to ensure high data transparency, optimised logistics processes in and, ultimately, the consistent growth of the Port of Hamburg. Read more about smartPORT Hamburg here.
smartNEWS