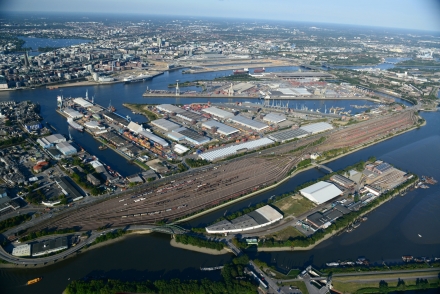 In 2014 the Port of Hamburg achieved its best ever total turnover of 145.7 million tons. The Port of Hamburg railway is also on course for a record. In 2014 some 44.4 million tons of goods and 2.2 million standard containers (TEU) were transported on its network. In comparison to the record year 2013, this represents a further increase of some seven percent in freight and container traffic.

With the introduction of a new IT system transPORT rail, HPA has the most cutting-edge production optimization information system for rail logistics in the world. "With transPORT rail we have reached another important milestone in our comprehensive smartPORT concept, which we will present at the World Ports Conference in June," says Jens Meier, Chairman of the Management Board of HPA. TransPORT rail controls all train movements, track occupancy, and supports train loading processes in the Port of Hamburg, ensuring transparent data exchange between all those involved in rail processes. Some 115 rail companies in the Port of Hamburg can communicate necessary information largely automatically through the implementation of a data interface. In addition transPORT rail can also be used via an online portal.

HPA is happy, not only because of the record results from the port railway. Jens Meier is just as happy about the record results in total handling in the Port with growth of some 4.8 per cent compared to last year. "It shows how important it is to develop and implement intelligent solutions for the port. With our smartPORT strategies we are going in exactly the right direction – towards the future for the Port of Hamburg," says the Chairman of the Hamburg Port Authority Management Board. In Hamburg container handling reached 9.7 million TEU (20-foot standard containers), an above average plus of 5.1 percent in the North Range, i.e. Hamburg, Rotterdam, Antwerp, Amsterdam and LeHavre. In 2015 Hamburg intends to break the handling record of 10 million TEU.

Details on this year’s results for the Port of Hamburg are here.