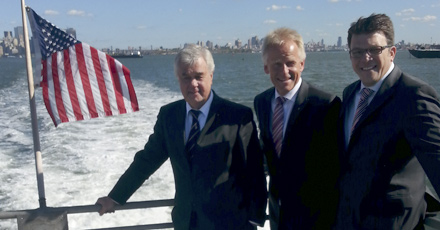 Maintaining relationships, presenting the metropolitan region and promoting Hamburg as a business location - this was what the delegation accompanying Hamburg’s Minister for Economic Affairs, Frank Horch, set out to achieve: from 17 to 26 October 2013 high-calibre talks were held in New York, Boston and Montreal

to further expand the network between Hamburg and North America with a special focus on the maritime industry.

The main issues that the delegates from Hamburg - among them the Chairman of the Management Board of the Hamburg Port Authority (HPA), Jens Meier - addressed were: Hamburg as an IT and media location, renewable energies and the maritime industry.

The industry branch network, Hamburg@work, a media and IT & telecommunications initiative, has already attracted attention throughout Germany and the delegation explored possible transatlantic options. Ever since the ushering in of Germany’s energy transition, which simultaneously means the end of nuclear power, energy-source conscious countries have been watching Germany – and Hamburg – both with a critical eye and a touch of curiosity: several European wind energy companies have set up operations here. This was one of the reasons why the Hanseatic City was promoted to US American and Canadian companies from the electro-mobility and offshore energy sector as an attractive location for business.

The fact that the IAPH World Ports Conference in Los Angeles was held only about six months ago proved to be a boon to the transatlantic relationship between Hamburg and North America. One particularly interesting aspect for Jens Meier and the HPA, which is internationally well connected via the IAPH, were the discussions with decision makers about the maritime industry and ports in general, the keywords here being the free trade agreement between the EU and the USA and the expansion of the Panama Canal. Moreover, the Canadian Port of Montreal is the seventh most important partner of the Port of Hamburg and the place where Hamburg-based Hapag Lloyd, the country’s largest shipping company, has its business premises.

In Canada as well as in New York and Boston talks about economic infrastructure and port infrastructure were held that also included infrastructure issues of the IT and the renewable energies sector. The "smartPORT Energy" project provided an excellent reference and was paid a lot of attention.