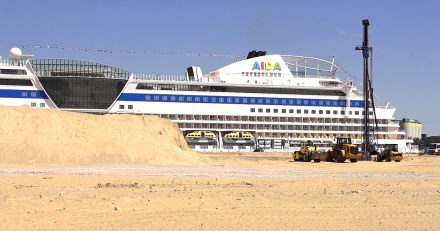 When half a dozen cruise ships line the quays at the Port of Hamburg and the Hanseatic city is sub-merged in a sea of blue light along the banks of the river Elbe, it’s Cruise Days in Hamburg. The three-day event that features a colourful street fair and ends with a spectacular firework display lured around half a million cruising fans into the Elbe metropolis. The highlight of this year’s event was, of course, the fleet of cruise ships sailing on the Elbe, among them the AIDAluna and AIDAstella, DEUTSCHLAND, MS Delphin and MS EUROPA as well as the MSC Magnifica. Like the year before the Cruise Days were staged by the artist of lights, Michael Batz, whose lighting art transformed the Port of Hamburg into a Blue Port.

Over the past years the Port of Hamburg has become one of the most popular cruise ship destina-tions in Europe. Last year about 200 vessels carrying more than half a million passengers called at the Hanseatic city and the number is growing every year. To accommodate the rising number of visitors and ensure safe and efficient passenger flows, the City of Hamburg is investing in the construction of a third cruise terminal. The ground-breaking ceremony at the beginning of July marked the official start of construction on the site at Kronprinzkai in Hamburg-Steinwerder. What is so special about Cruise Center 3 is that, unlike Hamburg Cruise Center 1 and 2 it will be built not on city land, but in the central port area. Passengers can reach the cruise terminal by road or rail or they can take a ferry from which they have a spectacular view of the skyline of Hamburg.

“Building the third cruise terminal is a complex task and a fresh challenge that we are happy to face. The new cruise terminal will create additional capacities for all shipping companies. The number of ship calls and forecasts make it evident that Hamburg needs a third cruise terminal,” says Jens Meier, Chairman of the Management Board of the HPA. The terminal, built on a site the size of roughly two football pitches, will be big enough to handle about 8,000 passengers. Whilst guests disembark in the eastern part of the building, embarking guests can simultaneously board their vessel in the western part of the terminal. This separation will also ensure efficient and speedy baggage handling. Besides the construction of the terminal building, car parks and access roads will be built and existing quay walls reinforced. The HPA and Hamburg Airport are in charge of the Cruise Center 3 project.